In addition to the fantastic bands we’ve got lined up each day, festival goers will plenty to keep them busy with the delights of our family fun farm attraction with its friendly animals, Maize Maze and children’s craft activities on site.


When you’re done having fun in the great outdoors, though there’s the serious business of music – check out the full line-up for each day below:

Emily Lockett is a teenage singer/songwriter from Stoke-on-Trent.

Emily’s first album of self-penned songs was released in December 2016; tracks from which have been played on various local radio stations and have received acclaim on music blogs, Staffs Moorlands Radio and BBC Introducing’s “Fresh on the Net”. She is currently busy writing and recording new songs for her second EP due out later this year.

Her music has hints of pop, folk and country and 2018 promises to be her busiest year yet for performances with a whole host of dates booked throughout the summer and we are pleased to have her opening MONMF Festival this year.

For more information see www.emilylockett.co.uk, find her songs at all online music stores or on Facebook @EmilyLockettMusic.

Four musicians from The Black Country fusing blues & country with a little twist to create their own unique sound. Check it out at MONMF this year!

This local, high-energy 4 piece specialise in floor-filling hits covering greats including The Beatles, Stevie Wonder, The Killers and The Kings of Leon – they’re sure to get the Friday night party started at MONMF this year!

Fronted by Paul Brindley, The Loveless has been a great live act over a number of years - playing large halls, bars, barns and toilets, and garnering national radio play and press exposure despite limited resources; taking a stand against Cowell-programmed mediocrity.
In 2008 Paul's song "You're So Tough" featured heavily on US coast to coast radio show 'Goldie's Garage part of [E Street Band guitarist] Little Steven's 'Underground Garage' network.

An authentic eight-piece Ska band with over 10 years live experience, The Superskas perform a catalogue of hits from the golden ages of Trojan Ska & 2 Tone. Covering Toots & the Maytals and Desmond Dekker, through to The Specials, Madness and The Selecter, The Superskas come complete with horn section and male and female vocalists and are guaranteed to get the party started!
Highlights include; Live collaborations with Damon Albarn of Blur, Dave Wakeling, Ranking Roger and The Beat, performing at the Specials after-party, performing on the same bill as Madness at the house of fun weekender and supporting Reggae royalty Steel Pulse and Musical Youth. Always a favourite at MONMF, we’re delighted to welcome them back at Friday’s headline act! 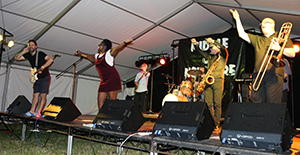 You’ll probably recognise Dave as the guitarist from original British rock band 'Demon' plus lead guitar and vocals for Staffordshire-based party band The VANZ. At MONMF this year he’ll be treating us to a solo acoustic set on Saturday afternoon… 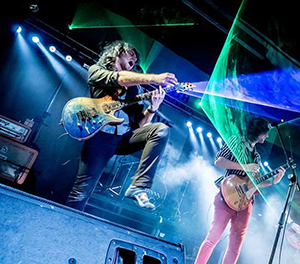 An eclectic band consisting of four multi-talented musicians and songwriters, probably unique in its ability to play a fusion of music genres, originals and covers with a twist, ranging primarily from blues, southern rock, rock & roll, jazz and country, with the occasional dash of reggae thrown in. Each member of The Herbaceous Borders brings his own personal creative expertise and style to each and every song, resulting in a totally crowd thrilling sound.

Are You Experienced (Europe’s number 1 tribute to Jimi Hendrix)

The UK’s No. 1 tribute to Jimi Hendrix, now in their 22nd year, and widely regarded as one of the best tribute shows on the circuit. Guitarist John Campbell bears more than just a passing resemblance to Jimi, and has drawn upon many years of playing in different bands and exploring various styles to perfect his ‘Hendrix’ persona. The band like to throw in some of Jimi’s lesser known album tracks as well as the favourites to help keep the die-hard fans happy, but if you’re a Jimi Hendrix fan, there’s something for everyone. 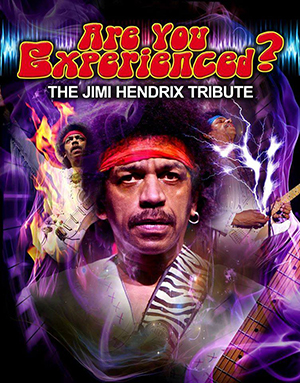 Brad Dear is a raw folk singer/songwriter from Nottingham.  Telling stories about life’s characters, losing yourself, finding yourself and running away, Brad blends his raw and husky vocals into sing along choruses and foot-stomping anthems. Whilst still a breakout artist, Brad Dear has already made some astonishing achievements, alongside tours of the UK, Europe and radio play, Brad has played gigs and festivals alongside the likes of Jess Glynne, Twenty One Pilots, Will Varley, New Model Army and Beans on Toast (Brad also featured in Beans’ ‘Small Town Celebrations’ documentary).

All-female, all-action rock band The Sex Pissed Dolls exploded onto the scene late 2014 and  have been wowing audiences and festivals with their edgy, high octane performance of classic rock and punk mixed in with their own original material.
The girls have been in much demand and have played main stage Isle Of Wight Festival 2017, accepted an invitation to perform at The Formula One British Grand Prix, headlined many other festivals appearing with such names as Texas, Rod Stewart, Razorlight, James, The Buzzcocks, Adam Ant, The Pretenders, The Kaiser Chiefs and The Damned to name but a few.
Following their 2017 critically acclaimed ‘Daughters Of Anarchy’ Tour the quintet will embark on a number of UK dates in early 2018 before appearing at summer festivals throughout the U.K. and Europe – including MONMF! 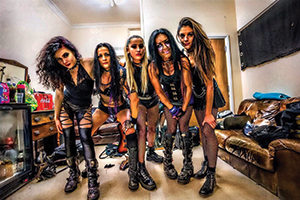 Originally from Brisbane, Australia, Darcy is a Country Recording artist for 4Quarters Records bringing the country scene over to the UK in style. Winner of BCMA song of the year and video of the year 2017. Nominated for BCMA best album and male vocalist 2017, Darcy is making a real mark on the UK country scene and will appear at MONMF 2018 with his full band.

This West Midland’s-based Led Zeppelin tribute band pride themselves on being a 'soundalike' rather than a 'lookalike’ act. The result is a sound hard to believe can be created by a three piece. If you really care about hearing the music of Led Zeppelin played properly, this is the band for you! http://www.thezeppelin3.co.uk/ 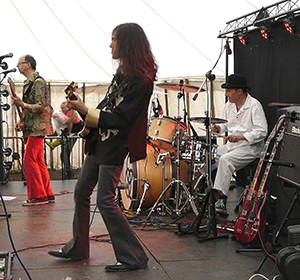 Xander and the Peace Pirates

Xander and the Peace Pirates are a testament to musical integrity and personal strength. Combining soul, blues and rock, their pervasive blend of inspired song writing and memorable performances has already seen them enrapture audiences from around the world.
Brothers Keith and Stu were discovered on YouTube by Gibson Brands CEO, Henry Juszkiewicz, and during their subsequent performances for the company at numerous international events, the band caught the attention of not just an ever-growing collective of fans but also industry legends such as Eddie Kramer (Jimi Hendrix, Led Zeppelin, Kiss, the Stones), who was so smitten by their music he offered to produce the band’s first album.
With haunting riffs, genius melodies, and an irrepressibly infectious charisma, Xander and the Peace Pirates continue to share their musical passion to standing ovations, while spreading a universal message of peace, love and harmony. We welcome their return to the MONOMF stage following a hugely well-received headline set at the 2016 fest! 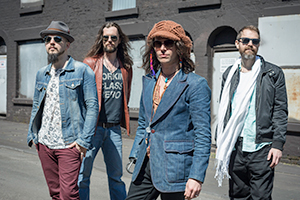 A solo singer/songwriter and guitarist from Walsall in the West Midlands, Faye mixes acoustic pop with powerful vocals, soaring harmonies and a foot stomping melody.  Playing at venues and festivals up and down the country on a regular basis and growing in popularity year after year, she is one to watch at MONMF 2018!

The Middle of Nowhere Jam Band

The festival’s very own ‘supergroup’ returns to close the 2018 event – regularly joined on stage by special guests from other bands in the line-up, you never really know what to expect from these guys apart from some great live music!

Sign up to our newsletter to keep up to date with all the latest news.